Joss Whedon Is My Master Now

Friday! The first to wake up after what feels like half an hour of Batch-sleep (thanks again, hurting leg, for the great night we two had) is of course Not-Yet-But-Soon-To-Be-Turbo-Mode-Steffi, tumbling over the rest of the sleepers into the bathroom. We are allowed to rest a few seconds longer, after which our host returns with breakfast and panicking outbursts (which will be occuring several times all over the weekend). The press conference begins at 10 a.m. and although "our" convention doesn't start before noon, we spoantaneously decide to join our still struggling reporter.

We arrive again at the Maritim Hotel around 9 a.m. We are instantly overwhelmed that the queue for the economy ticket attendees is non-existant. The delight is even greater when we realize that dear friends await us at the counter: Sessi (Tanja) and Matze! Matze decides to start the VERY FUNNY game of teasing me by calling me constantly by my real first name which he just had discovered (after all of the years it was secretly looming under all my posts at the stboard). Steffi proudly presents her two arm-bands - we sink slightly unimpressed into the armchairs, waiting for being allowed into the con-area.

Hours pass by. I help Sabrina with her old-west-nordic (or was it east?) vocabulary (it's even less interesting than it sounds - but hey, quality time with a nice girl ;) ), read the con-magazine about five times (discovering horrible typos and other mistakes, as well as completely unnecessary information like Jewel Staite's marital status. Who wants to know that she's married? NO ONE DOES!) and fail to notice that Jewel is walking by - thus loosing the "who spots the first celebrity" game (pfft, only because Richard Arnold didn't count). Steffi disappears surprisingly calm to the press conference and we meet our new FedCon friend Jan, labeled "our Dane" from there on, who's joining us in the waiting ceremony. Angie manages to slip prematurely into the con-area to provide robse with her B5-videos. We buy our Con-packages and I score more points with Sabrina by giving her my precious FedCon-pin :).

12 a.m. Finally! We rush in - aiming for the first panel of the rarely-invited Richard Arnold... NOT! Instead I steer directly to the art-exhibitions were I plan to exhibit my drawings. I soon find a good spot for "Cylon Dilemma", "Transformations", "Our girl", "Dress-code" and "Cybermen-Dalek Team-Up". Steffi returns proudly from the press conference and shows a few pictures she took. I scout the permanent autograph session nearby to get my biggest worry confirmed: No Jewel is listed on the board. Since with my economy ticket I won't get into the official autograph session tomorrow, my only hope to get an autograph of her on my drawing are my dear helper-friends at the counter. Angie joins into my lament - no Armin Shimerman as well - but shortly after leaves for the autograph session of Avery Brooks and Jonathan Frakes. Looking at the queue I decide to join the other girls at the Holodeck, where Hertzler and O'Reilly do their klingon-thingy again.

The chicken-joke. AGAIN. At least with the very entertaining Suzie Plakson as the narrator. The guys are still funny though and announce the arrival of Martok and Gowron the next day. We're thrilled and leave just in time to bare witness of Angie getting her autographs. Guess what, Steffi bans this moment on digital celluloid. Instead of giving Orli Shoshan's panel a chance (I really feel sad about that, since I won't get to know her all the weekend), I spend some time in the merchants' room drooling over some Doctor Who merchandise which I can't afford. One of those sonic screwdrivers will be mine someday! (never know when you need one) We try out the affordable meals outside the main bridge and risk a last look at the permanent autograph session... JEWEL IS THERE! Would be even better, if James Callis... well. Within fractions of seconds I grab my drawing of her and present it at her table. What will she say? Will she like it? Or will she nag about it like Nicole DeBoer did last year? Stay tuned...

Just kidding, no break today. Jewel likes my drawing so much, she aks to keep it. Too much for the simple batch-brain to handle. I come to my senses a few meters from the table, the signed drawing clutched in my hand. Eye-witnesses claim to saw I refused to give her the picture - probably because of the info about her marriage I've read earlier. I gave her agent/assistant/guy beside her (he was with Clare Kramer last year, I envy this guy...) my email-adress though, so she could ask for a digital copy (which hasn't happend till today, btw. I'll probably write her a message at her myspace-site). Sorry Jewel, but I only give away originals to very close friends... and Michelle Trachtenberg ;). Next Con I'll have a bunch of copies of my works with me.

Angie and I visit the TrekDinner Meet and Greet for a couple of minutes and enjoy a few of the trailers, before leaving to the mainbridge to get some good seats for the opening ceremony. Some Laura Bertram is holding her panel there, the Andromeda chick I've almost never seen before. This girl is a sorceress. Or a mage. A shaman, a druid or some other type of magic user. After mere seconds of listening to her, I'm under her obviously maxed-out 9th grade enchantment spell. "Mass-charm con-attendee" probably. Laura tells us in her unique way about a Kevin-Sorbo lifesize standup with a sign saying "Hi, I am halfpriced because my sword is bent!" and describes her most embarrassing moment (after stboards Darth.Hunter aks her about his force lance):

"[...] So - the people at the front desk [of the hotel] now know, there are two blond girls who have gone up to the plastic covered room with the guy from "Flesh and Fantasy". [..] ...and then the worst thing happens: He [the body-cast-artist] runs out of polaroid film. He calls the front desk. [..] Do you know that it took four guys to deliver that one package of polaroid film?!"

It takes me the whole screening of the Making of "Kurzzeithelden" after her panel to get rid of her spell - wow, what a girl. Little do I know that she will get even better tomorrow and I will ultimately do something I never did on a con before. We get a very special premiere exclusive trailer of the Transformers Movie (which everyone interested enough had seen at the worldwide web weeks ago), before the opening ceremony begins. Everyone of the guest-stars has arrived (well... James Callis...), Armin Shimerman gets more applause than Kare Mulgrew and Avery Brooks.

After the opening, a Jonanthan Frakes who must've ate a whole circus of clowns, rocks the house by goofing around like Brent Spiner couldn't in his best years. While slowly building a "reasonable facsimile of the bridge of the enterprise" out of three chairs, he answers questions about X-Factor ("the greatest job ever! I just had to walk around and read stuff from the teleprompter!" - "Was that stuff true? Of course!"), tells about Marina Sirtis' running gag dog Skelagi ("this is NOT a dog!") and lets us in into the secret of his beard ("... 12% of the left side..."). At the end of his panel - Angie and I are hurting very much because of the constant laughter - he finally shows us the reason for the "bridge". A great perfomance of a battle situation follows and he does an impersonation of Patrick Stewart: "25 years of the Royal Shakespeare Company for THIS?!"

I won't describe the Cirroc Lofton + Avery Brooks double-panel afterwards in detail. (I will, however, do catch up on this matter on a later point). Brooks made a big impression on me a few years ago, but at this panel his never-ending mental cuddling with his "son" is too much for me.

We are reunited with Steffi and Sabrina outside who hold a much bigger grudge for Avery since they missed a Garret-Wang-Panel because he overrun his panel last time he was at FedCon. We meet a lot of friends like the ever bright Moka and our Dane, but after Steffi finds her master in power-talking we leave to get a little sleep before the next, party-intense day. Unfortunately we have to take the ONE night-bus that obviously EVERY adolescent in Bonn and Cologne has to as well. A very uncomfortable ride home later and being smashed to 2D-images of ourself we sink in our beds. We have to be at the Hotel for the first panel tomorrow - it's Garret Wang's and the S-girls won't miss him another time!
um 19:02 1 Kommentar: 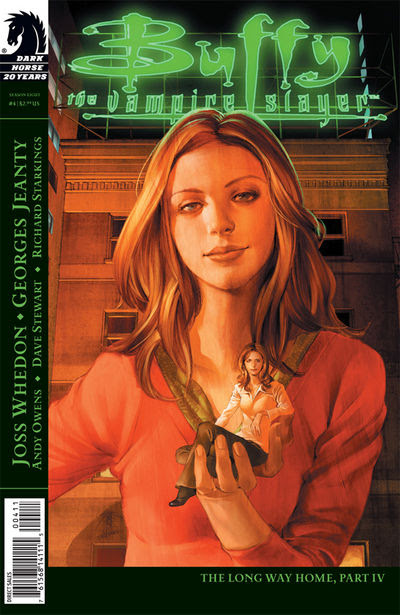 "Dawnie, you know you're not as proportionally strong as you are large." Aber trotzdem süß - siehe Cover links ;).

"Twilight. Is Coming. For you, for all your monstrous spawn... it all ends very soon."
"Are you talking about the girls who are protecting the world from--"
"Evil? Demons? Where do you think your power comes from? Oh, wait: You already know. You've upset the balance, girl. Do you think we were going to sit by and let you create a master race?"
"This isn't about demons at all, is it? It's about women. It's about power and it's about women and you just hate those two words in the same sentence, don't you?"
"You think it's only men want to bring you down? You're not human. You've been to war with the demons, with The First, but believe me you picked the wrong side. 'Cause god help us, if you win then you'll decide the world still isn't the way you want it and the demon in you will say just one thing. "Slay." We're not waiting for that to happen. We will wipe you out. Not just monsters anymore. It's you against the world. You're at war with the human race."