Ladies of Interest (12): Marina & the Diamonds

"I am Marina. You are the Diamonds."

I just have to use the momentum of her gig in Berlin a few hours ago to add another Lady to the illustrious group of the LOI. Because she rocked the house ;).

You can read all the biographical info about Marina Diamandis over at wikipedia, I'll just keep to my personal thoughts and stories and stuff. I saw the music-video to her recent single "Hollywood" a few months ago, and since I'm a sucker for pop-music it kept stuck in my head. Unfortunately not long enough to remember title nor artist. Lucky me went by a turned on radio at the doctor's and the non-geekess' flat and got the much needed info. Instant legal download of single followed. Infinite looping of the title did as well, very much to the displeasure of the flatmate. I discovered the ingenious "I am not a robot" and other songs of the 24-year-old Welsh girl - and the fact that her album was not out yet in Germany. Hrmph. Three weeks ago it was, I bought it and the Marina fever hasn't left me ever since.

The critics are very fond of Marina, Spiegel Online wrote a piece about her today. Her voice is just amazing, her album is a great mixture of fast tracks and ballads (I just LOVE "Numb") and since it's both mainstream-compatible and very special at the same time, I have no doubt in the predictions of her beeing the next big popstar. So I'm especially happy that I had the chance to see her perform in a small club today. Next time, she'll probably fill much bigger halls and I won't get the chance getting that close to her. 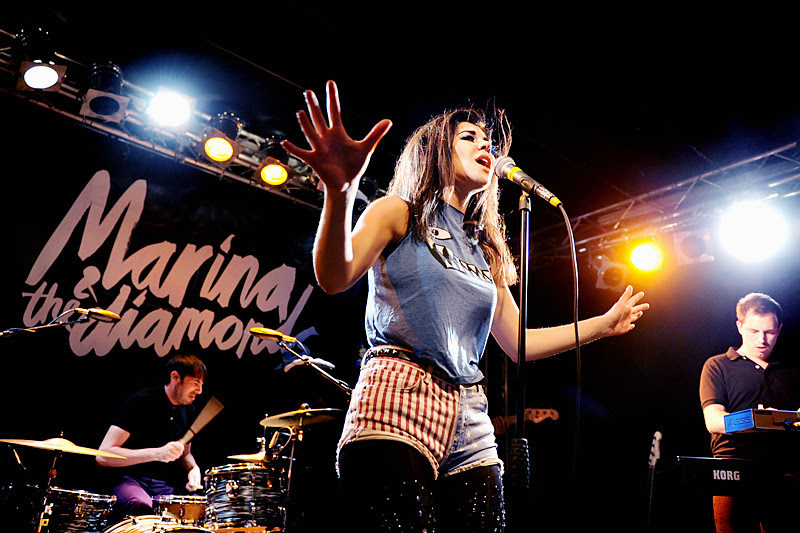 Speaking of close: Second row, right before the mike. Behind three guys one head smaller than me. So basically like one meter away from Marina, unblocked line of sight. [D&D-mode] That's threat range with a standard weapon (in fact, if I had stood a little more to the right, I would have succeeded in a touch attack when Marina decided to touch a few hands in the audience). [/D&D-mode] I definitely pays being an early bird. I swear she was looking right in my eyes (and mine only!) for a couple of seconds several times ;). Marina's outfit was surprisingly "normal" (compared to some very, very... strange ones I've seen) and she got rid of her sunglasses at the end of the first song (I hope I can show some pictures soonish, I let a norwegian guy in front for the first three songs to took photos; he gave me the internet-adress of the site where the pictures will be published). She performed all songs of her new album ("The Family Jewels", go buy it on amazon, it's just 7 Euros) with the exception of "Hermit the Frog", plus two older ones I didn't know (one a cover of "Starstruck"). It was phenomenal, the whole audience sang along most of the titles. After a few of the more exhausting titles, she replaced her keyboarder and played "Numb" and "Obsessions". Unfortunately she was done after one hour, including one encore. *sigh*

"I will definitely be back, I've got a soft spot for Germany." I'll be there (and selfish as I am I kinda hope, she'll not get THAT famous, so she will continue playing in small clubs like the frannz).

UPDATE: Thomas Olson was so kind to upload some of his pictures to flickr, one is shown and linked above. If someone speaks Norwegian, here's the article to the pictures.
um 01:00 Keine Kommentare: