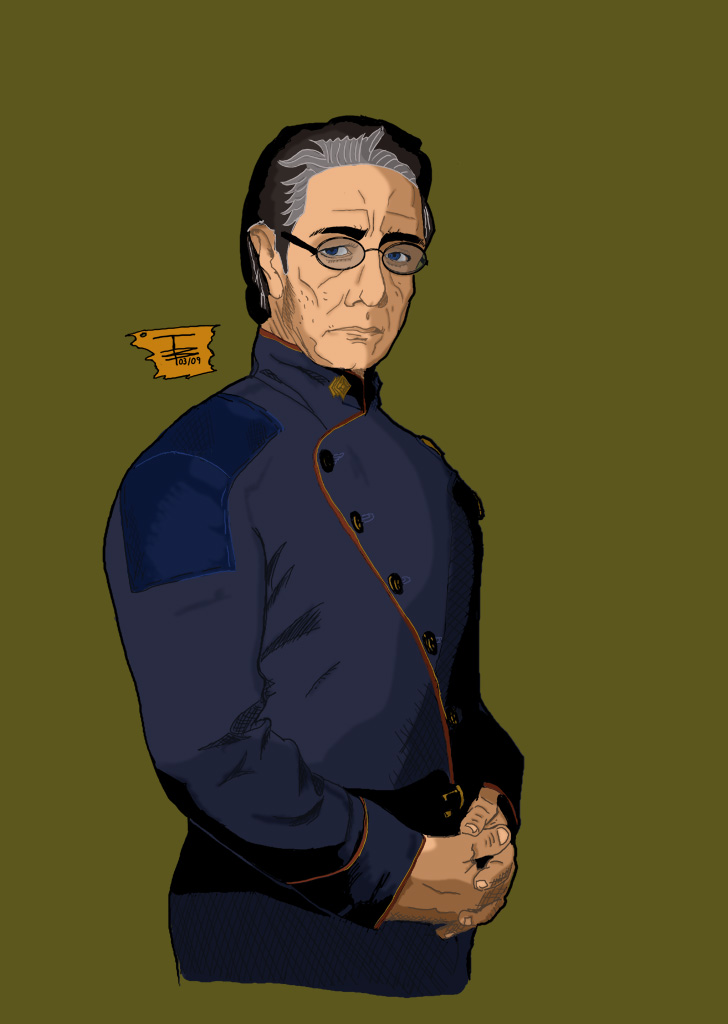 Two down, two to go.

It somehow confirmes my humble drawing-skills that the following occured in the process: I started penciling The Old Man without the wrinkles, therefore the drawing bearing not so much resemblance to him - but to Hotdog.... huh. You could think the actors playing Adama and Hotdog are kinda related... ;

I'm very satisfied with the work and the inking went noticeably faster. I grow accustomed to my Wacom :)
um 13:13 Kommentare:

As you may or may not know, I consider myself an agnostic (though I'm not sure I really am, so maybe I'm a Meta-Agnostic...) and there are days I am really glad about that:

Information Age Prayer provides a service for the forgetful religious person to read prayers in their name. With their computer via voice synthesizing (actually it's the computers of the company, NOT the personal computer of the subscriber as I thought first). So, if you don't have time to pray for yourselves, you can subscribe for a fee and somewhere a prayer is read for you by a computer.

"Are the prayers meaningless, will subscribing really make a difference?
(being exactly the very first question I had) As with all prayer, the final results are up to God as everything follows His will. We make no claims regarding the efficacy of the service, however it is our opinion that the omniscient God hears the prayers when they are voiced, as He hears everything on this Earth. The omniscient God knows exactly who has subscribed and who each prayer is from when their name is displayed on screen and their prayer voiced. He is also aware of all donations to charity from each subscriber and we can surely make a difference in these charities supported."

Huh. Honestly, if I were God.... I mean, C'MON! That's cheating! I would strike every wanna-be-follower with lightning who thinks he can get off that easy! Isn't the point of praying that you sacrifice some thoughts and time to your God? Maybe that's just me, but if I were religious I would feel deeply insulted when some soulless machine speaks with god in my name. (As a SciFi-Geek I'm pretty amazed by the way.... all kinds of cool stuff come in mind... mechanical gods, Deus Ex Machina, robots with their own religion....).

And it get's even better:

"If your children don't pray anymore sign them up for one of the many daily prayers available for each religion (click categories at the left). You may also want to have a prayer said for them directly. The prayer for children is the cheapest Information Age Prayer service at only $1.99 a Month. Pray for a child here."

Ha! Everything's gonna be fine for Junior. He doesn't pray, he doesn't believe... but hey, a machine prays for him! Because I paid someone to do that! Phew, NOW God will think totally different about that black sheep...

Pfff. I don't know who I pity more: The developers, The clients, or God. Probably the latter one. If you exist, God, I just spent twenty minutes defending the good old ways of praying. Keep that in mind on Judgement day :).
um 17:40 Keine Kommentare:

I kinda made some oath two weeks ago, to watch all of Claire Danes' movies. Today I'm in quotation-mode, so don't expect a big review ;).

"Are you the kind of person that takes time to get to know, and then when you get to know them - they're fabulous?"

"Shopgirl" is a very nice piece about love and desire. Mirabelle (Danes) is a young artist working as a shopgirl. Her life seems empty, so she tries to start a relationship: First with the very unexperienced and annoying Jeremy (Jason Schwartzman), later on with the 60-year-old millionaire Ray (Steve Martin, who wrote the script based on his own novella). I cannot really describe which direction the movie takes without spoiling to much, so I just use another quote from Roger Ebert's review:

One of the things you cannot do in this life is impose conditions on love. Another impossibility is to expect another's heart to accommodate your own desires and needs. You may think that cleverness, power or money will work on your behalf, but eventually you will end up feeling the way you really feel, and so will the other person, and there is no argument more useless than the one that begins with the words "But I thought we had an agreement."

"Shopgirl" seems to have no real "moral" or "message", it's just a portrait of how life is - and it's a well written and well played portrait, especially by Claire.
um 09:00 Keine Kommentare: 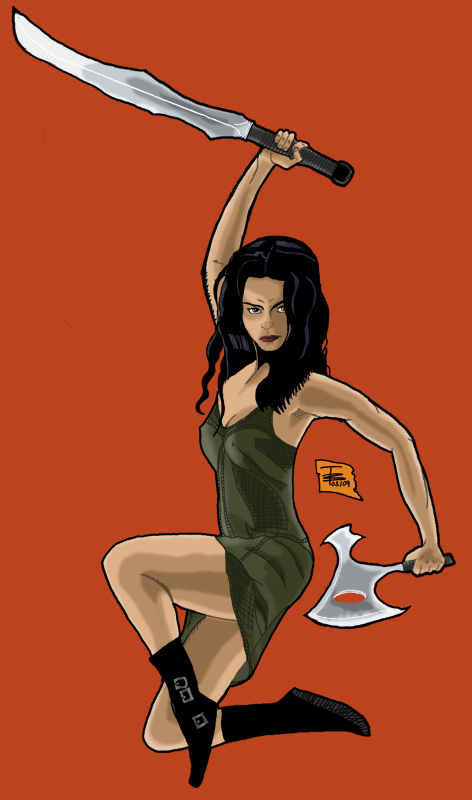 Okay, I did it. I did it two weeks ago and bought the Wacom Intuos3 A5 Wide Screen Graphic Tablet. Pretty expensive (though not as much as the homepage suggests), pretty cool, pretty useful, pretty needs getting used to. First results on the left, a digitally inked and colored River.
Nothing new on the coloring front, I just relied on my old process of lots of layers. Went much faster than with the mouse, just as I hoped. In fact, I was much much faster with the coloring than with the inking. It took ages to "draw" over the pencils with the pen. It was pretty hard to draw lines on the tablet while looking at the screen, because you just see indirectly what you're drawing. Got faster at the end, I'm optimistic to master that when working on the next projects (being the pre-mentioned already finished pencils of Adama, Tyrol and Baltar). Hopefully I'll learn to draw convex curves with that, 'cause I can't turn the tablet like I used to do with the paper...

Anyway, the digital ink has very great advantages, illustrated below. I can experiment more - if you compare the inked face with the penciled one you see the difference. Details I couldn't have drawn with a fineliner plus the priceless ability to erase (yeah, my pen has an eraser at the back, just turn around and erase... :) ), enabling me to loosen myself from the pencils and just rework in the inking process. Well, let's see how Adama's face will turn out - since it's just a portrait the pencils themselves are more detailed and I can work on a deeper level... 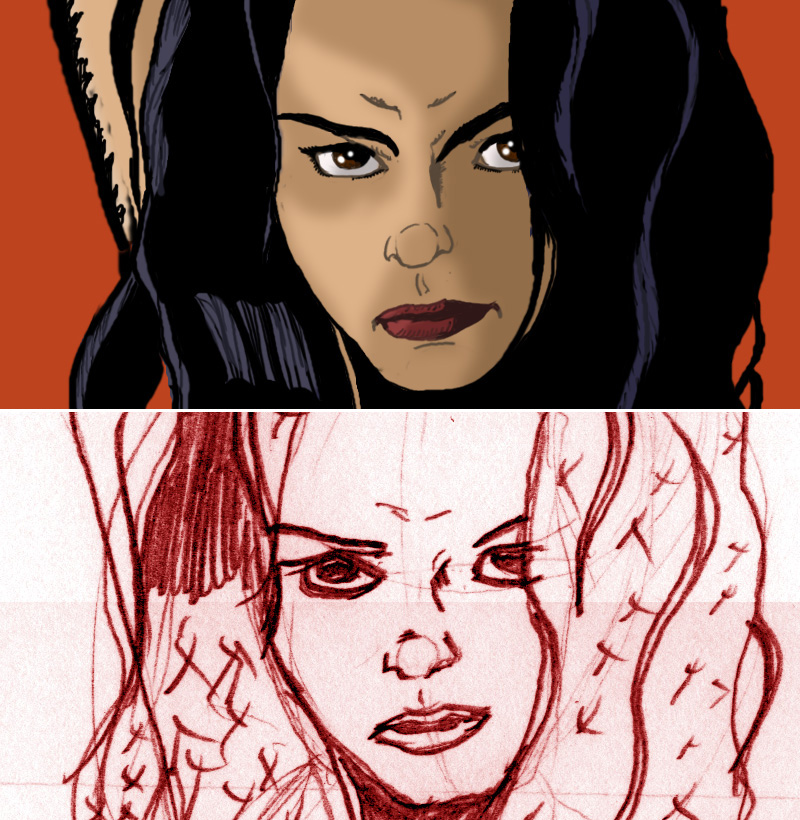 I really wanted to proudly announce the completion of the pencil works for the FedCon-Stuff, but... I just watched the second episode of "My so called Life" and I sorta kinda felt the necessity of doing another LoI-Post. Don't know why... ;)

The long-time reader won't be very surprised by Ms. Danes' ascension into the ranks of the Ladies of Interest since the simple glowing effect of her Yvaine in Stardust left me that ... enchanted. So I only hesitated shortly when I saw her smiling from a DVD-Box-Cover in the nearby MediaMarkt. "Willkommen im Leben" was the title and I remembered how the ex-fellow-student (is there an english word for "kommolitone"?) reminisced in nostalgia and Claire-Adoration some time ago.

I never saw an episode of that show before last week, so nostalgia's out of the picture - but just after two episodes I think I can already understand why it's so loved by lots of people. It really IS good, as far as I can tell (just google it). Plus, there's this girl, you know. Not so much with the glowing but almost unbearable amounts of cuteness. Examples on the left.

Teenage-(No Mutant, No Ninja) Batch would've fallen madly in love with 15-year-old Claire Danes instantly like 50% of the viewers did (the other 50% fell in love with Jared Leto, I hear), while Twen-Batch is of course much too grown-up for that (prefering the older, glowing version ;) ).

Anyways, learned some things about Claire when reading a biography:

- She had her first on screen kiss before having her first real one. Huh. That must've been ... difficult, I think. She almost complained about having to kiss (a then 22 years old) Jared Leto every day- I guess millions of teenage girl viewers wanted to have her problems.
- She was a persona non grata in Manila and her movies were banned in the phillipines after she ranted about the city in an interview (mentioning rats and the lack of a sewage system).
- She turned down the female lead of Titanic because she didn't want to be typecasted for "romantic" roles. She probably just didn't want to kiss Leonardo DiCaprio again ;).
- She did star in an unhealthy lot of flops - no wonder she stayed under my radar for so long.

But that time's gone, I will not rest before I've seen all those bad movies just because of her. Even Mod Squad. ;)

P. S.: Gamer, Flatmate: I want this Terminator-Evening ASAP! Maybe we could start with the third part?
um 23:10 Kommentare: